Welcome to the world of Beauty. Welcome to DERMEDICS™! 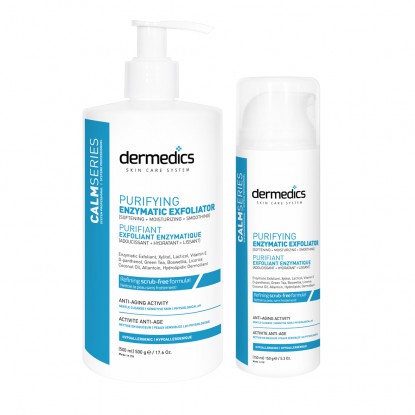 Unique scrub-free peeling with physiological pH provides deep purification without any downtime and requires no neutralisation.

Probiotics* contained in the formulation strengthen the skin by creating a natural protective layer and thanks to that the skin recovers its natural balance of hydration and nourishment.

*Probiotics are identified as “Live microorganisms which when administered in adequate amounts confer a health benefit on the host”.

Does not contain acids, soap, SLS and SLES.

Bacillus bacteria is a highly diverse group of microorganisms, known more than 100 years. There are strong scientific data substantiating the validity of the use of these bacteria as probiotics.

Sodium Lauroyl Sarcosinate in combination with Bacillus Ferment  provides very gentle and effective purifying exfoliation and that is why both components are used in our Purifying Enzymatic Exfoliator.

Refining scrub-free formula provides gentle, but very effective purification and it is a great alternative to AHA peels, because it leaves the skin ideally smoothed without irritations.

Exfoliation allows for deeper penetration of skin care products and meso serums = it is a great first step for all beauty therapies targeted on anti-aging, anti-acne and whitening effects.

Probiotic properties support in reduction of bacteria that can cause skin diseases, inflammation and creation of whiteheads and blackheads (comedo), such as Propionibacterium acnes / P-acnes.

Face, front part of neck and décolletage, as well as other skin areas depending on needs.

Isohexadecane
There are no safety measures or warnings associated with the use of Isohexadecane. A study was published in Contact Dermatitis in 2004 that concluded that Isohexadecane does not cause contact dermatitis.

Sodium Lauroyl Sarcosinate – Final Report of the Safety Assessments
A comprehensive safety assessment published in the International Journal of Toxicology deemed that sodium lauroyl sarcosinate was not expected to be potentially toxic or harmful, and had no mutagenic, irritating, or sensitizing effects.

PEGs – Safety Assessment
It is concluded, that the PEGs are safe for use in cosmetics under the present conditions of intended use. Taking into account all the information available, it can be assumed that these compounds as presently used in cosmetic preparations will not present a risk for human health.

This product is not a medication and it can not replace medical therapies if skin diseases occur - but can be effectively used as additional skincare product targeted on specialistic dermatological effects.

For external use only. Keep out of the reach of children.

Contraindications: hypersensitivity to any component of the formulation.

Comfortable capacity: this product is available in big size for professional use in a beauty salon, as well as for home care (to enjoy this comfort also at home).

* Efficacy of active ingredients confirmed by in vitro and in vivo tests through regular application.

Registered in European Union as Cosmetic Products according to the Cosmetic Directive 76/768/EEC.
Manufactured according to Good Manufacturing Practices (GMP).
Microbiologically and dermatologically tested. | NOT TESTED ON ANIMALS.
Made with the greatest care in the European Union.
Product Safety Data Sheet (PSDS) available on request.

You have no items to compare.

Thank you for your attention!
DERMEDICS™ Team

LEGAL NOTICE
No part of this publication, document or any part thereof may be reproduced or transmitted in any form or by any means, electronic or mechanical, including photocopying, recording, storage in a retrieval system, or otherwise without the prior permission of the author.